We did it! We built a brick patio start to finish without killing each other! There were injuries (you know this about us by now, right?) but nothing a package of bandages can’t fix. Here’s how it goes. Follow me.

We were up against a teeny budget – again – and had an existing 10×13′ brick patio to the side, a patch of dead grass immediately off the back steps that perpetually refused to grow anything, and a shaded space that held birch tree droppings.

The best part of the whole project was the price of the bricks: $0. Through sell/give sites I secured a bazillion wavy bricks in exchange for a 6-pack of beer, a deck of Cards Against Humanity, and a few other thank you treats.

The internet says first step is to research the project and set guidelines so naturally I sat on the bricks for a year, designed and scrapped a dozen drawings, and created several Pinterest boards of ideas before involving other people.

Never to do anything considered normal, we opted to have a circle on one end of a rectangle – with the circle made out of our existing bricks and the rectangle out of the wavy bricks. This option was significantly cheaper than matching, especially considering you cannot find wavy bricks anywhere except a landscape business in Hawaii. I don’t live in Hawaii. 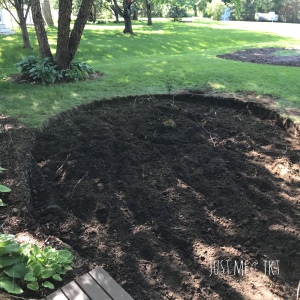 During the digging out process I kept asking myself why we were taking out earth to put earth back in but was reassured by my co-captain it was necessary. We (me – 25%) dug down 7 1/2 inches to account for several layers:

We managed to get the whole space cleared out in one gruesome 9-hour day. Note to readers: cheap help lives next door when they think there is a prospect of payment. ha!

Next step: bring in the gravel. This was dumped on our driveway and was hauled to the back yard wheelbarrow by wheelbarrow. As we (me – 85%) hauled it back, Captain S drove the rented tamper to make sure things were packed in and level. This entire step was done in pouring rain. It was disgusting. Neighbor Dave helped us in the rain and we were all soaked through. Dave, thank you. You’re a gentleman and a scholar.

Still no injuries at this point, which is some sort of a record for myself. I tried running the tamper a couple times but when it ran uncontrollably into my hosta I shut ‘er down and walked away.

When we were basically just squeegee-ing the rain water out of the gravel we said it was as packed as it would get. Next step was to lay the sand an inch thick and perfectly level. We got a few 1″ pvc pipes as our guides and as sand was shoveled in, we dragged a 2×4 across the pvc to make things flat. It worked really well and went without incident (hey – I’m just as surprised as you are). 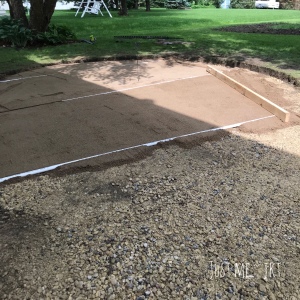 Once the initial circle pieces were angle cut the rest went in very quickly. A paver cutter is critical if you’re doing a circle – we tried a diamond blade on our miter saw but it wouldn’t get through bricks fast enough to finish the project this decade.

We had a gaggle of neighbor kids pry bricks from the original patio and place around the circle as I worked like a baker in a bagel shop (grab-place-grab-place-shift-grab-swear-place). Herein ends my brick laying (me – 17%). Captain S and our offspring managed to lay the wavy bricks one day when I was gone.

Because the wavy bricks covered so much area we rented the tamper again to make sure things were level and tight. Once completed, the gin was poured and the sand swept on top (never tamp and drink). We used weedblocker polymeric joint sand to do what the name implies: refuse weeds, fill gaps, and stick together. Boom. Done.

Now for the fun part! We only broke one 15-year old swivel chair in this process and I love love love my sturdy wooden chairs on the circle patio. Here are more fun photos of the whole thing. Send your love, follow the blog, but please don’t ask me to help you do this project at your house. My back is sore. 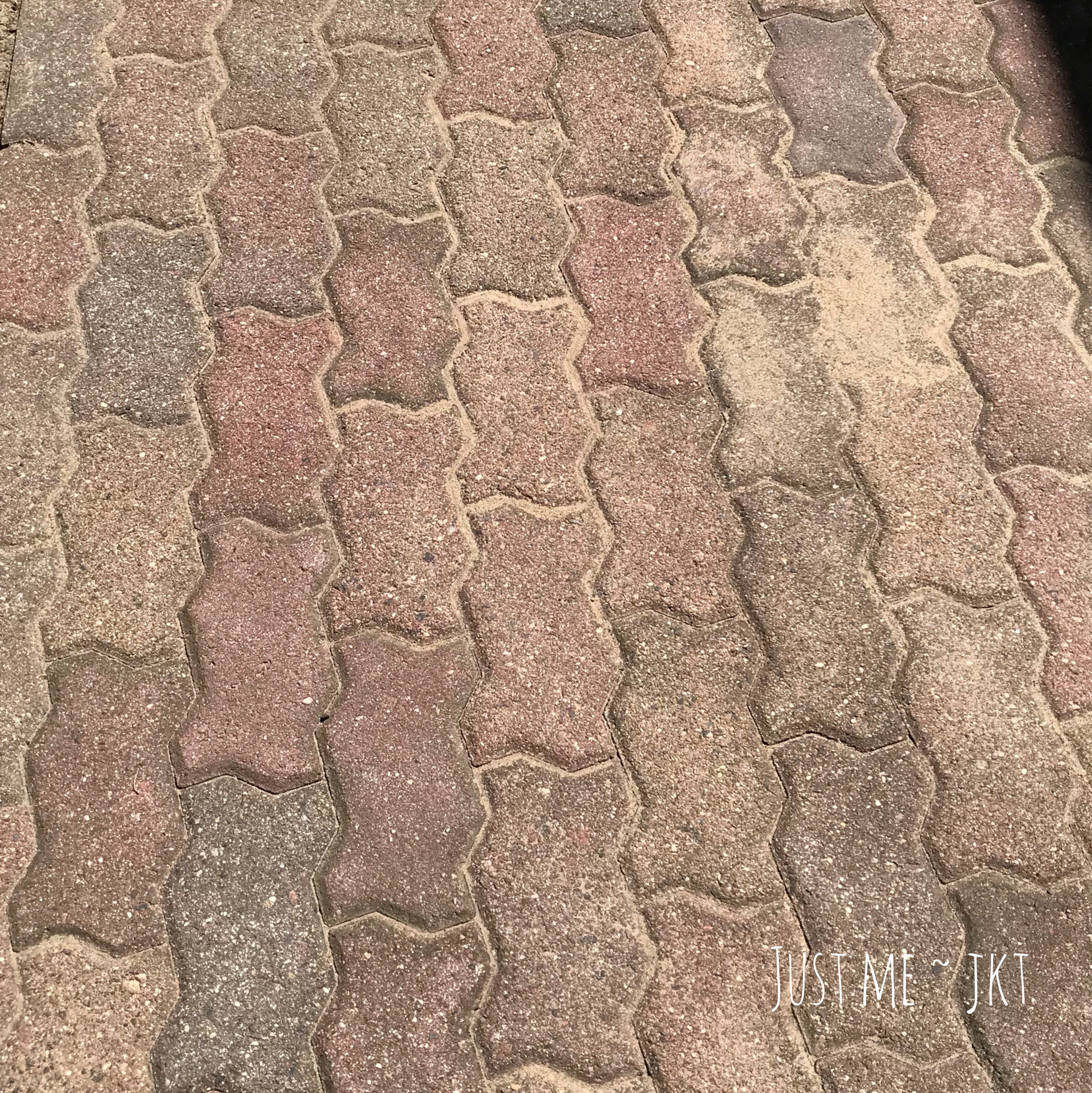 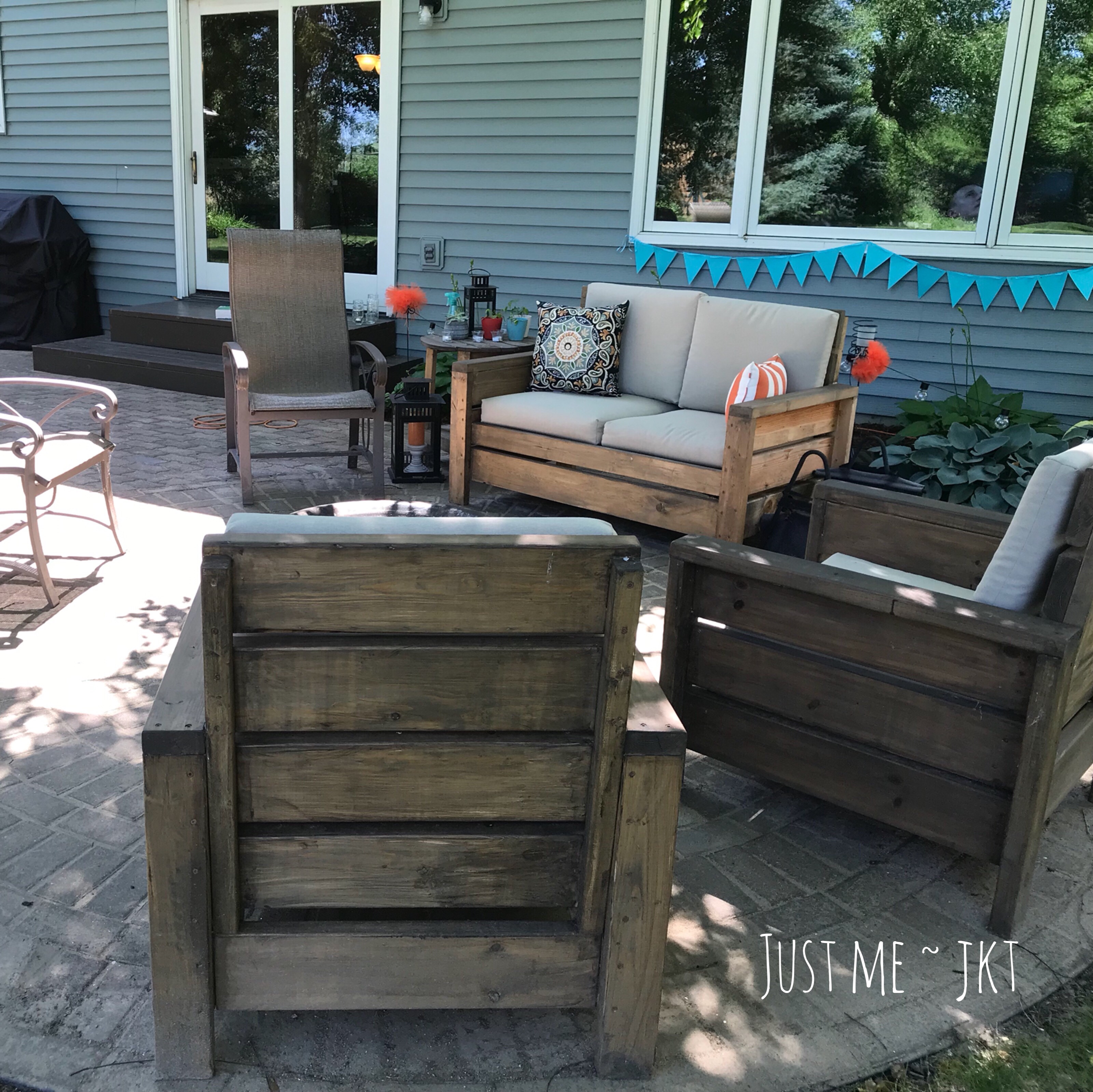 Special thanks to our helpers, both tall and small: Paul, Dave, Sam, Ben, Rowan, and Eliana…plus our own offspring Buddy and Boo. We owe you.

Winter is approaching and we packed up all our furniture. Now you can see the patio better! 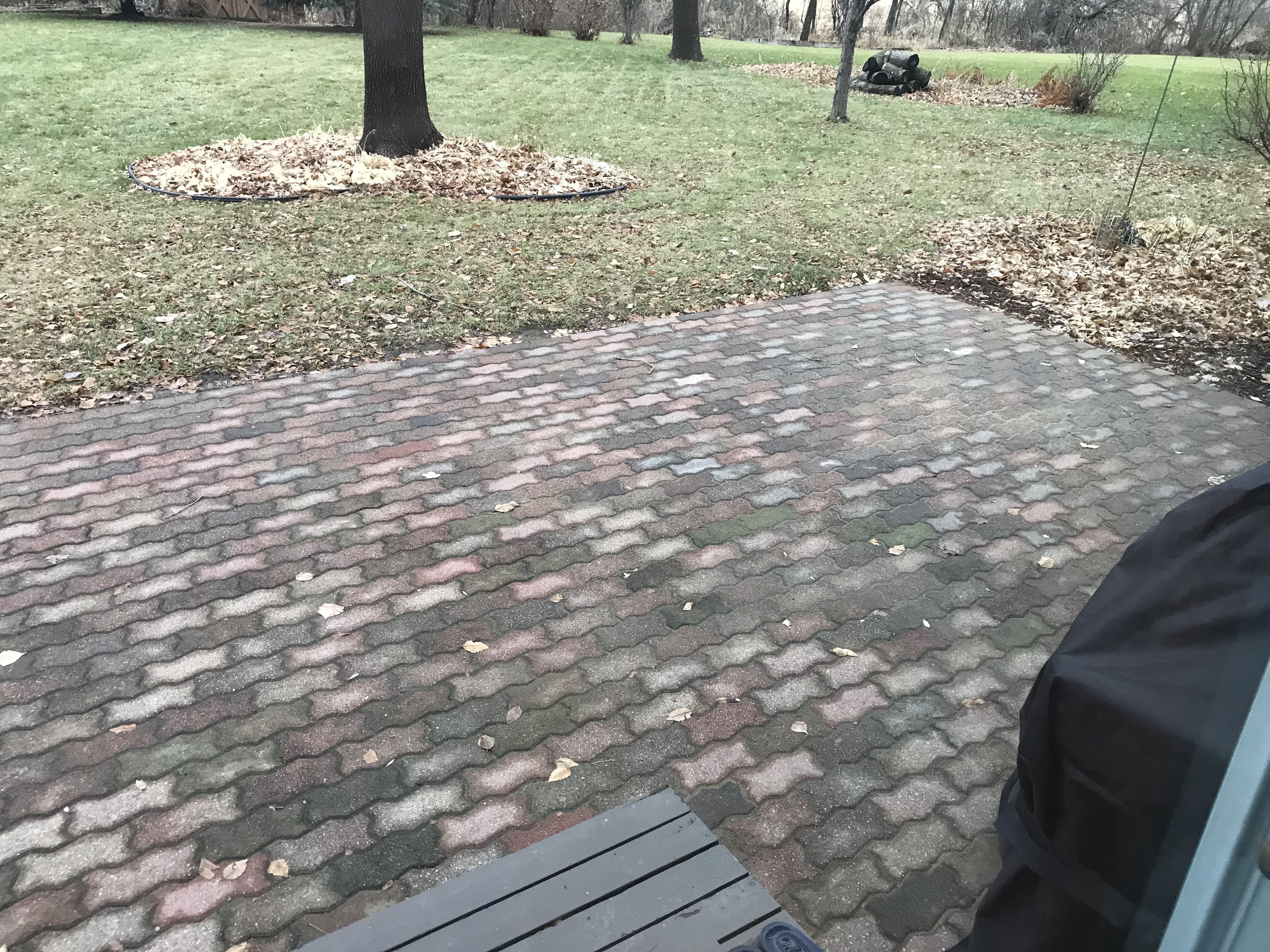